Today is election day in my state, so I took advantage of this great privilege.

In a political year li 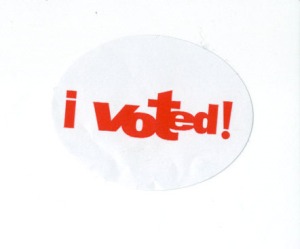 ke this one, it is interesting to ponder the relationship between God and government.  Some of the questions I ask myself are: Is God involved in government?  How should Christians engage in politics?  Is the secular state an acceptable vehicle for God’s work in our culture?

Those are far bigger questions than I have the skill or space to fully explore, but that won’t stop me from making a few observations.

Is God involved in government?

Yes, but probably not in the way we might think.  He does not advocate for a political party or an ideology.  To quote a thought I’ve heard in a sermon or two, “God does not take sides; he takes over.”  He is building a heavenly kingdom, and he is sovereign over all earthly kingdoms according to his purpose.  Somehow, he “changes times and seasons; he sets up kings and deposes them,” and yet we have a vote.  It’s a mystery.

How should Christians engage in politics?

Our democracy in 21st century USA is so different from the theocracy of the Old Testament or the Roman Empire of the New that the Bible does not speak to our situation directly.  During the days of the Old Testament nation of Israel, God led the people himself through judges, prophets and kings.  After the fall of Jerusalem to Babylon in 586 BC, the political entity of Israel ceased to exist (until 1948 AD), but until and through the first century, when the New Testament was written, the Jews had retained their religion and their culture, although they were subject to Roman rule.

The only explicit teaching in the New Testament with regard to government is that Christians should honor their leaders, pray for them, and live within the law.  Implicitly, however, there is more to be gleaned.  For example, Paul used his Roman citizenship to his full advantage. In my opinion, Christians today should do the same by engaging in the process in an intelligent and respectful manner.

Is the secular state an acceptable vehicle for God’s work in society?

One thing the New Testament does NOT say, even though some would say it does, is that descriptions of communal economies during the very early days of the church are a model for state social services.  The picture in Acts was one of the people of the church providing for each other.  The state was not involved at all.

I realize this is controversial.  Some say that as long as the poor and needy in our country are taken care of, it doesn’t matter who delivers the services.  They feel our tax dollars are well spent when used for social services.  Others argue that those tax dollars would be better spent in donations to charities and churches for more efficient and targeted use.

Personally, I know that many people depend on government programs and services, and I am thankful for them.  However, since government programs are notoriously inefficient, tend to succumb to corruption, and cause ripples of unintended consequences, the church must still have the freedom and means to work in Jesus’ name apart from the state.  Just my opinion.

What’s your opinion?  How do you engage in politics?

“Show proper respect to everyone: Love the brotherhood of believers, fear God, honor the king.”  1 Peter 2:17

4 thoughts on “God and Government”