How to Change the World

We all want a better world, right?

But what does a “better world” look like?  And how do we get there?

Ironically, those who are most passionate about improving the world often end up in angry fights over whose version of “better” should prevail.  So, nothing changes.

As a Christian, I believe that the Church, the Body of Christ on earth, is the one hope for peaceful and legitimate world change, not because Christians will dominate in an ideological power struggle, but because Jesus already permanently changed the world at the cross by defeating sin and death and by exposing the powerlessness of what we call power.

Jesus rejected the use of politics, position, wealth and celebrity to achieve his world-changing work.  He lived on this earth, but he operated from the perspective of heaven. He possessed infinite divine power but lived a life of complete surrender.   He was a leader who considered himself a servant.  He created the earth and all that is in it, yet he wandered from town to town depending on the hospitality and generosity of others.

Jesus changed the world by rejecting the ways of the world.

So, what does that mean for Christians today?

James Davison Hunter, in his book To Change the World: The Irony, Tragedy, & Possibility of Christianity in the Late Modern World puts forth a theology of faithful presence as a model for Christian influence in the world.  (I highly recommend the book, but be advised that it’s not a quick read.)

Hunter argues that Christians have continually attempted to use politics, power, money and celebrity to further God’s Kingdom.  It doesn’t work.  It has never worked. To fight for Christian dominance in the context of earthly power structures is to validate the very strongholds Christians are fighting against.

The incarnation, Jesus as God faithfully present with us, is a better model for an impactful Christian life.  No matter where we live, what we do, or how much money we have, we can be vehicles for the continuation of God’s world-changing work when we live as Christ’s faithful presence in the world.

There’s much more to it, of course, but perhaps you’ll get the idea from the following quote from a second century anonymous letter to Diognetus, possibly Marcus Aurelius’s tutor, describing the faithful presence of early Christians: 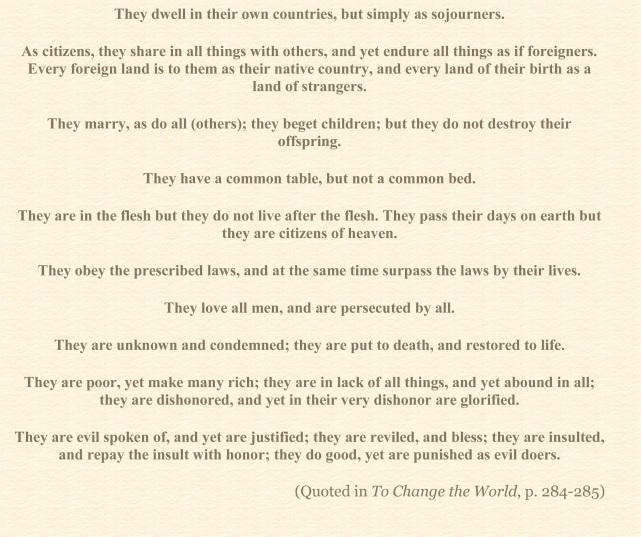 Lord, may I learn to live a life of faithful presence in the world.

What do you think?  How should Christians seek to be agents of change in the world?

10 Responses to How to Change the World