Celebrating the “Unbounded Exercise of Reason and Freedom of Opinion” 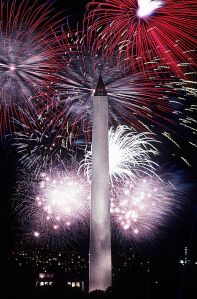 Having just celebrated the 4th of July and enjoying a beautiful weekend complete with fireworks, cookouts, and relaxation, (too much relaxation to write this post a few days earlier) I thought I’d take a moment to ponder what we celebrate every year.

For one day each year we are unified, and we all enjoy the same celebration.  Well, at least most of us.

As Dan and I watched fireworks Friday night in our town,  I imagined flying over the United States and seeing all the fireworks in the county at once.  It would be stunning.  I think every town in the country, small, medium or large, puts on a fireworks display for its residents.  Every one.  (Do you know any that don’t?)

Officially July 4, 1776 is the day on which the Declaration of Independence was finalized.  It is the day that began the United States’ foundational structure and set it on its path toward  greatness…and problems.  No country is without problems, and we have had plenty.

Perhaps the most defining quality of our country is freedom.  Thomas Jefferson said this in a letter written to decline an invitation to celebrate the 4th of July in Washington:

“May it be to the world, what I believe it will be … the signal of arousing men to burst the chains … and to assume the blessings and security of self-government. That form, which we have substituted, restores the free right to the unbounded exercise of reason and freedom of opinion. All eyes are opened, or opening, to the rights of man. …For ourselves, let the annual return of this day forever refresh our recollections of these rights, and an undiminished devotion to them.”

The “…unbounded exercise of reason and freedom of opinion” is what makes this country great.  It is also what gives us trouble.

We were recently horrified at murderous racial hostility in South Carolina. Where is the balance between freedom of opinion and public safety?  Murder is wrong.  Period.  We are a country drowning in our own debt.  Everyone has a reasonable opinion that the other guy should pay more.  Sooner or later, that’s just not going to work.  Note Greece.  The Supreme Court just gave a green light to same-sex marriages, and opinions are strongly divided over whether that is a good idea or not.

These are not new problems.  They represent persistent and deeply rooted divisions in our culture: race, politics, sexual preference.  If we are still a nation that allows unbounded exercise of reason and freedom of opinion, we might work through these and other issues.

Even if we are beyond working out these problems, it helps me to remember that the United States is just a temporary home.  It is a wonderful home; I wish it the best and will do my part, but my permanent citizenship is in the Kingdom of God.  In the Kingdom of God we will know freedom from sin, and that will be a genuine freedom that we’ve never experienced.

“The kingdom of the world has become the kingdom of our Lord and of his Christ, and he will reign for ever and ever.”  Revelation 11:15