Nothing is impossible for God.

What is your reaction to that statement?  It is true; that I know.  However, I admit that I respond to it with both belief and bewilderment.   Miracles happen, and it is awesome when God does something impossible.  But I am also puzzled by situations in which his people need him to do the impossible, and it appears that he doesn’t.

So, in search of clarity, I investigated the context in which that phrase is used in the Bible. 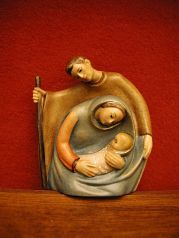 Those words were spoken to Mary by the angel Gabriel after he told her that she would give birth to Jesus, the Son of the Most High, who would take David’s throne and rule over an eternal kingdom.  No wonder Mary asked, “How can this be…?”

The Lord gave a similar message to Abraham and Sarah, who were 99 and 90 years old respectively, when they were told that Sarah would give birth to Isaac within the year.  Sarah laughed.  Who can blame her?  Sarah was barren in her youth, and at age 90 of course, the idea of giving birth to a child was laughable.  But God responded to her amusement with the rhetorical question, “Is anything too hard for the Lord?”

Jesus also commented on God and the impossible.  In three gospels, Matthew, Mark and Luke, it is said in the context of an exchange between Jesus and a rich young man who had asked Jesus what he needed to do to have eternal life. Jesus told him to obey the law and to sell all he had. The man walked away angry and sad, for he was very wealthy. Jesus then declared that it would be easier for a camel to go through the eye of a needle than for a rich man to be saved. “Who then can be saved!?” his disciples asked in horror.

Jesus replied, “With man this is impossible, but with God all things are possible.” In all three gospels, Jesus followed this truth with a promise that it might be necessary to leave family and possessions behind to follow him, but that anyone who does so will be richly rewarded. 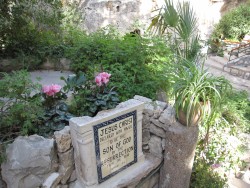 At the Garden Tomb in Jerusalem

Then he said something bewildering.  After just acknowledging that everything is possible for God, Jesus foretold his coming suffering. death and resurrection.

If God can do anything, surely he would stop the unjust death of his Son.

And he could have, but he didn’t, for through it he did the impossible.

When Jesus said that nothing was impossible for God, it was in the context of getting the likes of us with the baggage of all our sins, the size of camels, through the needle-narrow door of salvation into the presence of a Holy God.  It is impossible.  For us.

So Jesus did it.  What is more impossible than for the Creator and Lord of the universe to become a human and take the weight of our sins on himself so that we don’t have to?

As we enter the season of Advent, as you anticipate the celebration of Jesus’ promised birth, remember that it is a sign of God’s willingness to do the impossible for you.

Truly, nothing is impossible for God.  Do you believe it?