Does Religion Work Without God? (Part 1)

Does religion work without God?

Philosopher and author Alain de Botton suggests that atheists give it a try in his forthcoming book Religion for Atheists: A Non-Believer’s Guide to the Uses of Religion.”

In an excerpt from his book featured in Saturday’s Wall Street Journal, de Botton writes, “My premise is that even those who aren’t religious can find religion sporadically useful, interesting and consoling and should consider how we might import certain religious ideas and practices into the secular realm.”

Although de Botton is an atheist, I appreciate his thoughtful and respectful treatment of religion.  His observations and applications are fascinating to me on several levels.  The focus for this post is to examine how they reveal important differences in the perspectives through which atheists and Christians view the world.   (See my previous posts on Filter Bubbles  and  Filter Checking Filters for thoughts on interpretive frameworks.) 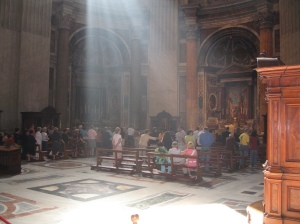 One of religion’s most attractive features for de Botton is the genuine community, blind to differences in race, income, age and social status, that he observes in congregations of believers.  He attributes this phenomena to beautiful buildings, shared liturgies, and ceremonial meals.  He writes, “We gaze up at the vaulted, star-studded ceiling and rehearse in unison the words, ‘Lord, come, live in your people and strengthen them by your grace.’  We leave thinking that humanity may not be such a wretched thing after all.” (Italics mine.)

As an atheist, de Botton must limit the scope of religion to human activity.  If we just put ourselves in the company of others, learn to love and accept each other, teach and live up to a high moral code,  humanity will rise to new heights.   For example, the value of the sacrament of Communion for de Botton is that, “Christians understood that it is when we satiate our bodily hunger that we are often readiest to direct our minds to the needs of others.” I admire de Botton’s good-hearted optimism, and I believe he understands the spiritual significance of the Eucharist for Christians, but as an atheist he is incapable of seeing beyond the human realm.  There is a lid on his thinking.

For Christians, worship is an experience that extends far beyond the church building, beautiful as it might be, and the people in the room, worthy and valuable as they are, to the God who reigns over earth and heaven.  Religious practices like Communion are not about getting along with each other but about remembering Jesus’s sacrifice by which we get right with God.  The lid is removed.  A Christian world view offers a much wider perspective.

My intent is not to critique or condemn de Botton’s atheistic perspective, but simply to recognize that his view of the world is vastly different from my Christian interpretive framework.  If we were ever to engage in a conversation, I’m sure de Botton would resolutely defend his perspective, just as I would stand firm on mine, but if we each recognized and respected the other’s world view, we would have a chance at actually communicating.

What do you think of de Botton’s thesis?  Do you find it difficult to communicate with those who see the world very differently from you?

3 Responses to Does Religion Work Without God? (Part 1)