Following is a guest post written by my brother, Ric, in which we will connect some dots between God and beer.  Yep.  Some of you are thinking that is a no-brainer.  Some of you just raised an eyebrow.  In either case, I hope you’ll enjoy Ric’s thoughts.  He is an accomplished home micro-brewer, and well qualified to discuss this subject. 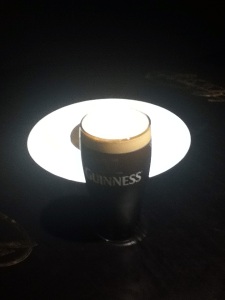 Is there anything else like the wonderful way the liquid and gas separate when the beer hits the glass, known to beer geeks as ‘cascading’? Can you think of a beer with a more consistent, dense, foamy head? And finally the taste: smooth, roasty, and slightly bitter with that signature hint of sourness that separates Guinness from all other stouts.  Perfection.

Guinness has been on my mind since my wife Maureen gave me the book, The Search for God and Guinness, by Stephen Mansfield. Maybe she thought that if I was reading about beer something about God could sneak in too?

I tapped the book for all kinds of information on Guinness and the origins of brewing, and I also learned a few fun facts about Martin Luther that must have been taught the week in 8th grade confirmation when I was sick. Luther really enjoyed beer and even wrote about it. Did you know that his wife Katherine was a brewer at her convent before she left to marry Martin?

Most captivating, though, was the connection between God and beer.

Beer was considered a God-send during much of western civilization. Luther and other reformers of his time made the distinction between drunkenness, which was a sin, and alcohol in moderation, which was a gift from God. From my 21st century Bud-Light-bikini-beach-volleyball perspective this sounds somewhat discordant; alcohol a gift from God?

That’s how the Guinness family saw it. The Search for God and Guinness tells how they desired to gratefully receive that gift and pass it along to others. 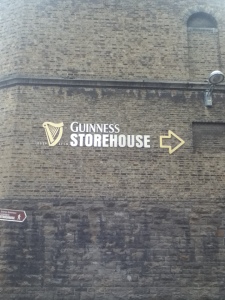 Arthur Guinness grew up in early 1700’s Ireland in a religious home with a strong work ethic. His father was a caretaker for a nobleman’s estate, and one of his duties was to brew the estate’s beer.  With a small inheritance from the nobleman and a lot of natural business acumen, Arthur opened a brewery which was passed on from father to son for generations.  It seems that there were two career choices for Guinness men: brewer, or pastor. Neither was considered above the other, and both were used to much the same goals. Along with the brewery, succeeding generations inherited the family goal of using their gift from God for the good of others.

The whole nation of Ireland experienced the benefits of God’s good gifts as stewarded by the Guinness family.

God’s Gift #1) Beer was a contribution to public health.

The process of making beer, boiling the sweet juice of soaked barley and fermenting it, killed all the pathogens and bacteria lurking in medieval water supplies making beer a go-to drink. People who drank beer lived, while people who drank water often did not. Beer was so commonplace that mothers even served a mild brew to their kids.

God’s Gift #2) Beer ingredients were prevalent and it was easy to make; just add water!

Unlike other grains, barley naturally contains enzymes that convert starches to sugars when exposed to warm water. God put all that chemistry for us into one little self-contained kernel. After soaking and straining the barley, all the brewer had to do was leave the sweet extract alone and something magical happened as the sweetness decreased and alcohol and carbonation appeared. In medieval Europe, brewer monks called this mysterious transformation “God is Good” because they had no other explanation. Today we understand it as fermentation: wild yeasts settling on the sweet extract, ingesting the sugars and excreting ethanol (alcohol) and carbon dioxide (carbonation).

In the same era of the infamous sweatshops in Hell’s Kitchen, New York, Guinness was one of the first organizations to hire a company physician who made house calls to workers at no charge. When the squalor of urban Dublin became so bad it was seriously harming his workers, Guinness built company housing. (Much of it is still standing and is a desired address in Dublin.). The brewery sponsored education and entertainment for their workers, funded orphanages and donated public parks for the population at large. When the potato famine drove families into urban Dublin, the Guinness family responded when no one else did, including the government.

Guinness became a coveted place to work and a very popular corporation all over Ireland, which helped increase sales, which meant there was more profit with which to assist workers and the public…you get the picture.

Reading The Search for God and Guinness through the lens of today’s popular culture often made me sad for how far our corporations have strayed from such noble aspirations. On the other hand, I was inspired by how Guinness prospered by unapologetically viewing their work, their brewery, as a gift from God to be shared with others. It is easy, and all too common, to blame today’s big corporations for not doing more, but such finger-pointing is divisive and ultimately ineffective.

Instead, the Guinness story is a good reminder for us to employ Colossians 3:23 at work and at home: “Whatever you do, do it with all your heart, as working for the Lord.”

Or, as Arthur might have said, “Work hard; help where you can, then have a cold one, all to the glory of God.”

6 thoughts on “God and Guinness”