How do we make sense of the senseless?

A bus full of tourists blows up in Bulgaria.

A  child is diagnosed with cancer.

Movie-goers experience a violent reality instead of the fiction they expected to see.

A teenager take his own life.

Since I cannot make sense of things like these, it helps me to focus on that which I do understand.

And this is what I know: We can trust the heart of God.

I know that because God has revealed his heart to us throughout Scripture.  Even in the sad realities of life on this fallen earth, God shows his heart to be loving, gracious and merciful.

The story of Jesus raising his friend Lazarus from the dead is particularly illuminating.

John 11 tells the story of Jesus and his friends Lazarus, Mary and Martha.  Lazarus was dangerously ill, so Mary and Martha sent word to Jesus that “the one you love is sick” (v. 3).  The obvious suggestion was that Jesus should come to them and heal Lazarus.  After all, Jesus had healed thousands of strangers, surely he would do the same for the “one he loves.”

Image by RayNata from Wikimedia

Instead, Jesus waited a couple of days and only went to Mary and Martha as they mourned their brother’s death. 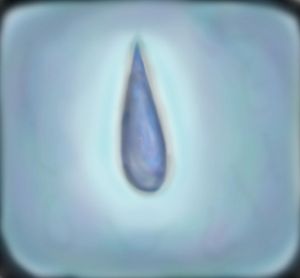 Teardrop image by Snowlock from Wikimedia

Mary and Martha understood that Jesus was Lord, the Christ, and that he had power over life and death.  (By the way, I love the solid theology of these two women.  They had no doubt learned it at the feet of Jesus himself, which was quite progressive for women in first century Jerusalem.)  Interestingly, Jesus and Martha engaged the situation intellectually, (see v. 21-27) while Mary simply expressed her emotions and wept at his feet (v. 32-34.)

When Jesus saw Mary and those with her weeping, “he was deeply moved in spirit and troubled.”  Mary then took Jesus to the tomb of his friend Lazarus.

People at the tomb of Lazarus asked the same sorts of questions that we ask.  Why didn’t Jesus prevent this?  Why did this happen? Where was he a few days ago?

It is the shortest verse in the Bible, but it speaks volumes.

I imagine Jesus, Creator of heaven and earth, standing at the grave of his friend and feeling the full force of the human emotions of grief, loss, pain, and anger.  Things in this world are not as they should be, and he knew the glory and perfection of what should be.  Evil, disease, poverty, hatred and violence are not, and never were, God’s desire for the world; they are the result of human sin.

Jesus raised Lazarus, who had been dead for four days, in a demonstration of his power over sin, death and all that should not be.   Not long after this event, Jesus himself would be crucified, die an excruciating death and rise in victory guaranteeing the future restoration of this damaged world to all that it should be.

Jesus knows what it is like to grieve, to weep, and to experience evil.  God knows how it feels to watch his Son suffer and die.  Why did God permit such a thing?

Because he loves us.

Therefore, we can trust his heart.

What helps you cope with tragic events?  Do you trust the heart of God?

“I have told you these things, so that in me you may have peace.  In this world you will have trouble. But take heart! I have overcome the world.”  John 16:35