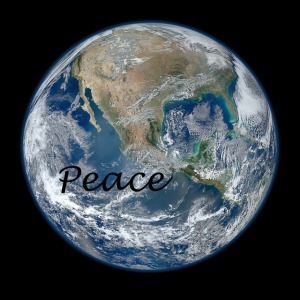 Christmas is a time of year when we hear the phrase “peace on earth” frequently, and this year we may look for peace a little more fervently than usual.  After all, we’re celebrating the day that Jesus, the Prince of Peace, was born.  However, today about 2000 years after his life the world is decidedly not peaceful.  We are all on edge.

What kind of peace did Jesus offer us when he said, “Peace I leave with you; my peace I give you. I do not give to you as the world gives.”  John 14:27

The Old Testament term that we translate peace is shalom, which means wholeness, completeness, well-being.  Its meaning is much richer, and more beautiful, than the simple absence of hostility.  In the New Testament the Greek word that is translated peace is eirene.  Outside of the Bible it simply meant the absence of strife, but the Bible used it to translate shalom and the meaning of the word grew to include serenity, security, physical and spiritual well-being.

Any of those meanings can be intended when we read of peace in the Bible.

A look at all the New Testament occurrences of the word “peace” reveals that Jesus pointedly said he did not come to bring peace on earth, but that he would cause conflict.  Yet, he blessed the peacemakers, he told many people to go in peace, and he gave his disciples peace.  And then, in a decidedly un-peaceful move, Jesus was executed.

After Jesus died the disciples would have felt anything but peaceful.  Their world was wrecked.  They had just lost Jesus, their teacher, the Messiah.  Had they misunderstood?  Nothing made sense at all, even though Jesus had told them several times that he would die and rise again.

When Jesus rose from the dead and appeared to his disciples, he proclaimed “Peace be with you.”  Maybe he knew that peace was their deepest need.

Several of the disciples went on to write parts of the New Testament, and most of their writings regularly speak of “grace and peace,” while they assume that Christians live in a hostile world.  They knew the power of Jesus’ words: Peace be with you.  They had been a mess, and Jesus gave them the peace of God, and then they gave it to others.

I have friends who have recently lost loved ones, and others who are facing illness, and I pray that they will experience the grace and peace of God.  I pray the same for the masses of people I don’t know who are experiencing violence and displacement as refugees.  For people living in gang war zones and facing the random loss of life, I pray that they will know the grace and peace of God.

God’s peace is powerful.  If you have experienced the peace of God, why don’t you pass it along?

How does Jesus bring peace to your life?

“Glory to God in the highest heaven, and on earth peace to those on whom his favor rests.”  Luke 2:14

3 thoughts on “Peace on Earth”