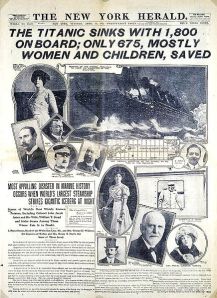 The sinking of the Titanic is a story upon which other stories have been projected.  It was a true and tragic event that has become a useful illustration of human hubris.  Famously touted as unsinkable, it has ironically become the iconic image of a sinking ship.

Lately, it has also been handy for those who like to tell a story of class warfare.  Fatalities were higher among third class passengers than among first class passengers.  That is a fact, but does that mean that the first class passengers took advantage of their position and selfishly grabbed all the spots on the life boats?  The bloggers at bloggingblue.com think so.  They call it a “life-and-death class struggle.”

Are we sure about that?

According to Cal Thomas, in his article Titanic: The Reality, there are other Titanic dramas that don’t quite fit a class warfare narrative.  Thomas quotes Dr. Harry L. Reeder from an article in “Tabletalk,” telling a slightly different story.  “Men of power and prestige (including Benjamin Guggenheim, John Jacob Astor and Macy’s department store owners Ida and Isidor Straus) sacrificed their lives for women and children of the lower class, many of whom were indentured servants.”

What I find fascinating is what these different perceptions of a one hundred year old story say about our interpretive frameworks today.  The conservative commentator notices that Wall Street types sacrificed their lives for the poor.  The liberal blogger notices that more poor people than rich people died.  They each chose the stories that fit into their guiding narratives and interpreted accordingly.

Politically, we are increasingly divided into two polarized world views, each operating according to a narrative through which all events and stories are interpreted.  On the left, the rich (read Wall Street) are greedy and exploitive, the poor are helpless and marginalized, and the government needs to play Robin Hood.  On the right, the marketplace is the source of growth and prosperity, the poor are best served by a healthy economy, and the government over regulates and punishes success to enrich itself.  There is some truth as well as gross generalization and misrepresentation in each story.  These narratives, in my opinion, are outdated, divisive, and manipulative.

There is a better narrative through which we could more accurately and helpfully interpret the events, politics and stories of our world.

It is a story of a perfect world, created by a good and self-existent God, that has been hopelessly contaminated by sin.  This world is a sinking ship.  Political battles are just re-arranging the deck chairs on the Titanic.  (I couldn’t resist.) In this story, neither wealth nor privilege nor politics will guarantee a place in a life boat.  In this story, we are all equally valuable and equally vulnerable.

The Bible tells an overarching story of a good, gracious and just God offering salvation to sinful people.  It is a beautiful story of sacrifice and redemption.  This is the story through which we should interpret all other stories.