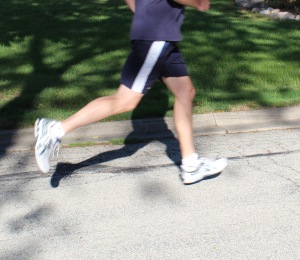 Do you recognize God’s footsteps beside you as you walk through your days?

Yesterday morning my husband and I both put on our running shoes and stepped out for a little exercise at the start of a beautiful September day.  I began my run/walk (emphasis on walk) a few minutes before he did, but before long I heard his gait approaching from behind (he actually runs the whole time).  I did not have to turn around to check; I recognized his footsteps.

One night last week I heard a key open our front door followed by the unmistakable sound of our grandson’s energetic footsteps tapping two for one with our daughter’s heeled clicks on the hallway tiles.  I wondered, in a semi-conscious state, what they were doing in our house in the middle of the night, until I realized that I had been dreaming.  Even in my dream, I recognized  their footsteps.

Our two sons have equally identifiable footsteps.  For example, our youngest never, and I mean never, goes up or down stairs at a normal pace.  He vaults up the stairs two or three steps at a time, and his descent sounds like a controlled stumble.  This is especially tricky while carrying a full cup of coffee.

As my husband ran past me this morning, I thought about how comforting it is to hear familiar footsteps whether in a dream, while shaking my head over another spot of coffee on the carpet, or out for a morning run.

I find the same comfort in recognizing the footsteps of God always nearby; leading, protecting, and encouraging as I walk with Him.

God walked with Adam and Eve in the garden; he led the steps of the infant nation of Israel through the desert; he walked with his people through victory, defeat, prosperity and exile; and Jesus walked to Calvary carrying a cross.

He did it all so that we can walk with him today and forever.

Yesterday, I “heard” God’s familiar footsteps during my day in the form of several companionable and encouraging phone calls from friends with whom I have the pleasure of walking through this season of life.  We spoke words of encouragement, affirmation and prayer for each other.  It felt like Jesus and I were taking a walk with mutual friends.

How do you recognize the footsteps of God in and around your life?

“The Lord is my shepherd, I shall not be in want. He makes me lie down in green pastures, he leads me beside quiet waters, he restores my soul.  He guides me in paths of righteousness for his name’s sake.  Even though I walk through the valley of the shadow of death, I will fear not evil, for you are with me…”  Psalm 23:1-4