What if Jesus walked into your place of business, spoke to the staff, and then instructed a salesperson to make a phone call which resulted in the biggest deal your business had ever landed?

Then imagine that Jesus said, “Never mind. Leave it all and follow me.  From now on you’ll market a better product.”

What would you do? 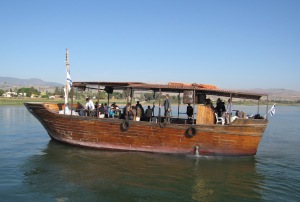 Some first century fishermen, Peter, Andrew, James and John to be precise, experienced this very scenario.  Jesus met them on the shore after an unsuccessful night of fishing and then sent them back out into the lake where they caught a literal boat-load of fish.  Then he said, “Come follow me, and I will make you fishers of men.”

Here’s what they did: “At once, they left their nets and followed him.”

A first century fisherman’s boat and nets represented his livelihood, his identity, security for his family and the defining activity of his days.

These early disciples demonstrated that they were willing to trust Jesus for their livelihood, security and identity instead of trusting in their boats.

It seems reasonable to trust in a tangible asset, something solid that we think we can control, like a boat, doesn’t it?  That which seems rock solid today, however, will not last.  Boats eventually wear out.

Over recent years, God has shown me that I’ve been trusting in my “boat” instead of in Him.  I would have said that I was faithfully following Jesus, but in truth I really wanted Jesus to smooth the way for me and my plans.  It’s no fun to face up to failures of faith, but it is also an opportunity to appreciate God’s grace, forgiveness and unconditional love.  I pray for the faith to truly and freely follow him.

Do you trust Jesus with your security, your identity, and your days?  Have you ever “left your boat” to follow him?

“But seek first his kingdom and his righteousness, and all these things will be given to you as well.”  Matthew 6:33

11 thoughts on “Leaving our Boats and Following Jesus”